Welcome by the Marco Polo representative on arrival at Yangon international airport and transfer to the hotel. After a brief fresh up at hotel, begins the orientation tour of Yangon. Explore the commercial capital city Yangon, the biggest city in Myanmar with a population of 5 millions. Its tree lined wide avenues, its shady green parks, and the beautiful huge lakes give Yangon the reputation of one of the most charming and lively cities in Asia.The orientation tour of Yangon includes Sule Pagoda ( landmark in city centre ) –is unusual in that its octagonal shape extends right up to the bell and inverted bowl, the City Hall & Colonial buildings, Chaukhtatkyi Pagoda – which includes an enormous reclining Buddha, photo stop at Karaweik Hall & Royal Barge on the Kandawgyi Royal Lake.At sunset, visit the marvelous Shwedagon Pagoda, the glistening golden stupa that towers over the capital and one of the wonders of the world, is the spiritual centre of the country. 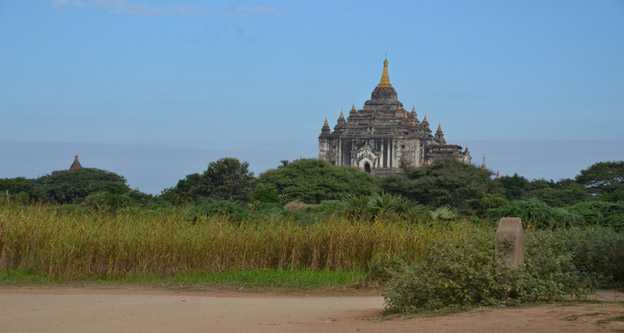 Early morning you will be transferred to the airport for the flight to Bagan.Arrive Bagan, the Bagan Archaeological site is one of the richest archaeological sites in Asia and it is the main tourist attraction in Myanmar and considered as one of Asia’s holiest cities along with Varanasi and Jerusalem by archaeologists, historians and photographers thanks to the greatest collection of Buddhist sculptures, lavishly decorated with mural paintings and plaster carvings from the 11th to 13th centuries. During its golden age in the 12th century, Bagan was known as “the city of four million pagodas”. While Kublai Khan and several massive earthquakes have reduced that inflated number drastically, what remains is quite incredible.Over the next days we’ll visit several small villages, the museum and the principal pagodas, including: Shwezigon Pagoda, the first monument built in Myanmar Style, the prototype for later pagodas is one of the oldest and loveliest temples and remains an important place of devotion for the Burmese; Ananda Temple, the masterpiece of the early style temple architecture Built in 1066, the gilded and whitewashed Ananda is among the most elegant temples, with delicate decorations in glazed tiles along its base and terraces; Gubyaukgyi Temple, displays a strong influence of Indian culture; Shwesandaw pagoda displays a strong influence of Mon influence with a steep stairway directed to the terraces for a superb view from the upper level.Late this afternoon, climb on top of one of the tall temples and watch the sun drop into distant hills and experience peaceful, tranquil moment and indescribable magical power of Bagan.

This morning after breakfast, visit Nyaung Oo Market, then proceed Sulamani temple, Shwegugyi Temple, and Minanthu village. Bagan is also famous as the centre of Myanmar’s thriving lacquer-ware industry. In the afternoon, the tour includes a stop at a local lacquer -ware workshop to watch the skilled artisans at work on the various stages over a period of six months.Then proceed to old Bagan for a pony cart tour among the temples; Tayokpye, Htilominlo and Thatbyinnyu Temple before sunset. Evening enjoy Bagan’s most popular sunset at Bu Paya overlooking view to Ayeyarwaddy River. Enjoy these magical moments.

This morning after breakfast, transfer to Nyaung Oo airport for the flight to Mandalay, the second largest city boasting its rich cultural heritage, represents a Buddhist city of conservative culture and traditional art. Mandalay was the last capital (1860–1885) of the last independent Burmese Kingdom before annexation by the British after the Third Anglo-Burmese War in 1885. On the way to Mandalay city you may wander through Paleik, an unspoiled site that’s home to hundreds of temples and pagodas. Visit Mahamuni Temple – the most revered pagoda in Mandalay, the Royal Palace (read the Glass Palace), which houses a huge bronze Buddha image covered in thick layers of gold is one of the three holiest places in Myanmar. It is always crowded with pious devotees from all over the country. In the late afternoon, visit Golden Palace Monastery, the most well known wooden monastery in the country, famous for its intricate carvings. It is the only original building from Mandalay Palace having miraculously survived the bombings of WWII. Kuthodaw Pagoda known as the biggest book in the world with hundreds of marble slabs inscribed with the entire Buddhist Canon. Enjoy the sunset from Mandalay Hill and enjoy the panoramic view of the plain.

This morning after breakfast, take the interesting two hours drive to Pyin Oo Lwin (Maymyo) which was originally a Shan-Danu village; in 1896 it became a hill station that served as a retreat for European civil servants stationed in Mandalay. It is also considered the melting pot of Burma as it still has the largest community of Anglo-Burmese, Anglo-Indian, native Shan, Myanmar and Chinese immigrants especially from Yunnan. During your visit you can visit the colorful market, take an easy stroll in the centre of the town to see the Purcell tower which was a gift from the Queen of England. The main street is a mix of colonial-era buildings and modern Chinese buildings.

This morning after breakfast, explore Maymyo local market and you can also take a unique horse drawn carriage to the National Botanical gardens. The natural forest was transformed into the botanical garden in 1915. The 436 acre garden includes many species of local and foreign trees, rare indigenous and endangered native orchid species, and seasonal flowers of native and foreign origin, recreational lawns and alluring landscape. A walk through the rain forest and swamp walkway is a real delight. Drive back to Mandalay in the evening. 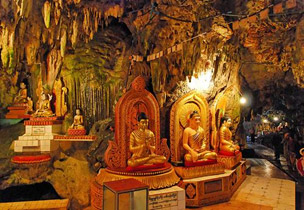 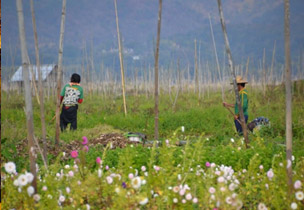 Breakfast at the Hotel, transfer to Mandalay International Airport for flight to Heho. Upon arrival, transfer through the scenic countryside of the Shan Hills, past many colourfully dressed tribal people to Pindaya, beautiful town, in the Southern Shan State. It is only about one and a half hours scenic drive away from Heho airport to the North. About 50,000 of Danu, Taungyo, Palaung and Shan people live in this small town. The lines of huge old banyan trees, the peaceful lake in the town center, the lime stone caves and the simple friendly people make this small town famous as one of the travel destination. Pindaya is well known for its extensive Limestone caves, a house of some 6000 Buddha images, include Shan Handmade Umbrella factory to stock up on handmade paper and shan paper umbrellas. Visit Pindaya Caves, located next to the town of Pindaya, is the site one should not miss. There are three “caves” on the ridge which runs north-south, but only the southern cave can be entered and explored. The southernmost Pindaya cave can be entered and extends for about 490 feet along a well-worn path. It is known for its interior which contains over 8,094 images of Buddha. Some of the older statues and images in the cave have inscriptions dating back to the late 1700s, or early Konbaung Period, and the earliest one dated from 1773. The collection as a whole forms an impressive display of Buddhist iconography and art from early Konbaung era to the modern period. No other place in Burma displays such a range of style, not only in the images, but also in the ornamental thrones which surround the images.

This morning, a quick visit to Kalaw before continue to the Inle Lake – the natural and unpolluted, famous for its scenic beauty and the unique leg-rowing of the Inthas; the native lake dwellers, the world’s hidden spot of scenic beauty. You have a exploration of the lake and environs today by longtail boat. View the traditional inhabitants of the area, the Intha, who are best known for their unique leg-rowing technique and cultivation of floating gardens.Other highlights today, in addition to the beautiful mountain scenery that surrounds you, will include visits to the venerable Phaung Daw U Kyaung. Of all the places you visit in Myanmar, wonder around the scenic lake by boat, witness the unique leg-rowing of the Inthas and their unique fishing method, floating gardens, the floating villages the friendly hill tribe people, ancient pagodas, and its colorful festivals will give you a life time memories.

This morning, spend a full day aboard a boat exploring the breathtaking lake, which is surrounded on both sides by high hills. You will have an opportunity to visit the market, which is held once in every five days. It is the best opportunity to see hill tribes coming down to sell and buy their products. Indein Temple is a complex which travelers express as Mini- Angkor. After a short distance walk through the bamboo forest , the exciting vie Indein Temple complex is situated in the western shore of the lake and most of the internal wall of the ruins of 1054 shrines make you say “wow”. In the afternoon, visit Impawkhone silk weaving village, a blacksmith, Cheroot making and surrounding villages. Return to the hotel in the evening.

Breakfast at the Hotel, enjoy the beauty of the Lake until the time you will be transferred back to Heho airport for your flight to Yangon. Arrive Yangon, visit to one of Yangon’s fabulous bazaars- an endless jumble of colour, clamour, heady aromas and contraband goods. The Bogyoke Aung San Market (Scott) has an enormous array of consumer goods. This will be a wonderful opportunity to pick up some handicrafts and transfer to hotel.

Breakfast at the Hotel, enjoy a leisurely morning. You will be transferred back to the airport in time for your flight back home.
Please note that you will be required to pay an international departure tax of $10 USD (per person).

Note: The above programme is subject to change with or without prior notice due to factors such as weather, domestic flight availability, road transport conditions and etc.