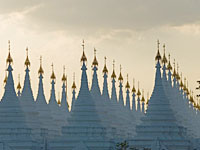 When people hear about Myanmar, Mandalay comes as the city where one must visit as it retains the most important history of Myanmar, the monarchy and the palace! King Mindon founded Mandalay on 23rd May 1859 AD. Mandalay is the traditional and cultural center of Myanmar and it is formerly known as “YadanaPon” and it is situated at the heart of the Upper Myanmar. It is founded in 1857 by King Mindon, and it is well known as a home of Myanmar kings. Mandalay has numerous historical memorials and Buddhist monuments. The Royal Palace stands gloriously in the middle of Mandalay as a pride for all Burmese. King Thibaw took the last seat of the Dynasty just before he was arrested and took away by English, and it was burnt down by bombs during the Second World War and has reconstructed according to the documents of ancient citizens. There are several cities which can be found around its vicinity such as Amarapura (the city of immortality), U Bein Bridge with the length of 1.2 km. Mahaganayone monastery. Ava (golden era of Myanmar literature) and it is 20km southwest of Mandalay. Sagaing is a living center of Buddhism faith and it is 21km southwest of Mandalay, the most tranquil and the most calmness city of Myanmar which is full of Buddhist monuments, pagodas and monks. Mingun is 12 km drive from Mandalay. In 1838, the earthquake hit Mandalay and it destroyed some of the pagodas of Mingun. The highlighted places of Mingun are the huge 90 ton bell, the Mingun Sayataw is world recorded for being able to recite every single pages of Buddha sermons by heart.
It is the last capital of the Myanmar Kingdom, the second capital of Myanmar, both a bustling commercial centre and a cultural tourism site with the royal city, many old monasteries, showcasing Myanmar arts and architecture of the 19th century and the palace where kings of Myanmar lived. It is also the commercial centre with railroads, river and air transportation to all parts of the country. Mandalay is situated about 600 kilometers north of Yangon on the Ayeyarwaddy river and it is the second largest city of Myanmar. The palace was constructed in 1857 in Myanmar traditional architecture.
Mandalay is not only well known for its traditional, cultural and spiritual wonders, the city possesses the best handicraft arts in Myanmar such as hand-woven embroidery in silk and cotton, wood and stone carving and bronze casting etc. Gold leaves are made in Mandalay to offer to Lord Buddha at different pagodas and the gold leave making process is so amazing that one must go and explore the process. Along the Ayeyarwaddy river in Mandalay, one can see that the jetties are crowded and busy with boats rowing up and down the river, bamboo rafts, cargo ships which carry logs from the teak forests. Amarapura, Sagaing, Ava, and Mingu are the ancient capitals around the vicinity of Mandalay. 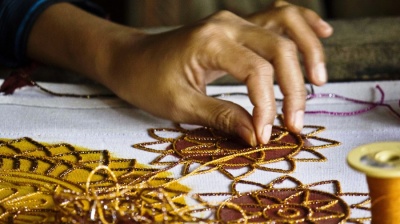 For lovers of arts and crafts, Mandalay represents the largest repository of Myanmar arts and crafts. It is here that visitors can observe skilled craftsmen making beautiful articles of tapestry, ivory, wood, marble and stone carving and engravings, silverware and bronze statues according to the time-honored traditions of their forefathers. Besides those, the other arts and crafts workshops of silk-weaving and gold-leaf making are also places worthy of visiting. 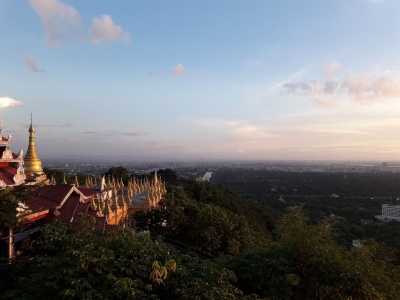 One thousand seven hundred steps uphill will give you a bird’s–eye view of the city. It will give you a spectacular sight with the outlaying areas of the Ayeyarwady plains and the misty Shan hills. You can also take mini-taxi to the top of the Mandalay hill and then walk down. Along the stairways are fascinating and interesting sights including the souvenir stalls, the Peshawar Relics Shrine where the Relics of Buddha is enshrined and the gold-plated Shweyattaw Buddha image of immense size. Mandalay palace was the first palace to be built in Mandalay, by King Mindon when he shifted his capital from Amarapura in 1861, to fulfill an old prophecy. The site was chosen with the auspicious omen and astronomical calculations. The magnificent palace was built of teak wood on raised brick plinth gilded with gold and vermillion. The queens’ chambers is in order of priority 1 Southern, 2 Northern and 3 lesser queens in the West. All ancillary buildings for the court, the fortified high walls with ramparts, the moat, water systems, roads, gardens with shady tamarind trees, recreational playgrounds, swimming pools, mint, security ports with infantry, cavalry, archers, artillery, sheds for royal elephants, stables, audience halls, throne halls, religious edifices and monastery and devotional halls were superbly planned and executed to minute details. The implementation and completion of construction took five years (from 1857 to 61). The artistic workmanship and handicrafts depicting the glory of the golden age of the days gone by is still amazing, awe inspiring and the beholder will be spell bound with wonder. The entity of the palace cannot be separated from the Mandalay Hill, from where the prophecy and name is dewed. It is located right in the centre of the palace grounds, which is meticulously a true square, enclosed within fortified high walls with ramparts and the beautiful deep moat all the layout in perfect squares. So much so the city surrounding the place too had been laid-out in blocks of squares enclosed by sheets. The supply of water to the moat is fed by a muddy canal. It is surprisingly strange that the red muddy water turns crystal clear. This moat water is potable and the source of home consumption and is free from lime content. It also serves a double purpose as a good protection from enemy assault of those days. The reflection of the Mandalay on the eastern moat is a beautiful scene to behold from the south-eastern corner. The panoramic view of the Palace and the surrounding areas as far as the Sagaing Bridge, the Ayeyarwady River and the hill ranges seen from the Mandalay Hill during sunset will be an enchanting experience. The beautiful palace with many other buildings were destroyed by fire due to the ravages of been reconstructed in brick masonry from photographic records, plans and drawings. As seeing is believing, a practical visit will confirm an enchanting experience than a thousand words in theory. 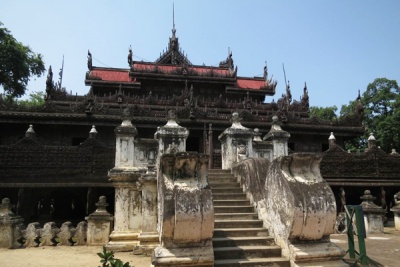 This beautifully built monastery was originally inside the palace compound. King Thibaw had it moved to its present site east of the palace in 1879 after his father’s death. King Bodawpaya built Mahamuni pagoda in 1784. In 1884, the original shrine was destroyed by fire and the current one is comparatively recent. This Pagoda is also known as Payagyi (Big paya) or the Rakhaing Paya. The centerpiece of the shrine is the highly venerated Mahamuni image that was transported to Myanmar from Mrauk U in Rakhaing (Arakan) in 1784. Mahamuni Pagoda is one of the most famous and the most visited pagodas in Myanmar. Some pilgrims come early in the morning around 3am/4am to watch the face-washing ceremony of the pagoda and to offer the towels to the pagoda. It is also believed that the water falling down from the face of the “Mahamuni” pagoda is lucky and it can protect people and grant health, there are many people who line to get the water bottles. Not too far from the Kuthodaw Pagoda is the Atumashi Monastery (the Incomparable Monastery), built in 1878 by King Mindon, and partially destroyed by fire in 1890. It was however, rebuilt in 1996.The “Atumashi Kyaung” (meaning the Incomparable Monastery) is also one of the worth-seeing places. It was indeed an inimitable one in its heyday. The reconstruction work on the monastery has been done by the government in 1996. King Mindon built this Pagoda in 1868, surrounding it with 729 marble slabs inscribed with the Tipitaka text (the Three Baskets of the Buddhist Pali canon). It is often called the “World’s Biggest Book”. The Sandamuni Pagoda is located to the southeast of Mandalay Hill and resembles to the nearby Kuthodaw pagoda. It was built by King Bodawphaya in 1164 with 11368 vise of cast iron while he was temporarily on the other side in Mingun, and conveyed to Amarapura. In 1299, King Mindon conveyed it from Innwa to Nanmyay Bontha Palace at the foot of Mandalay Hill. It is said that in 1275 Hermit U Khanti while doing missionary work enshrined 1774 slabs of manuscripts of Athakatha Tika of the Pali version of Tipitakas in 758 cave-like pyathats there. 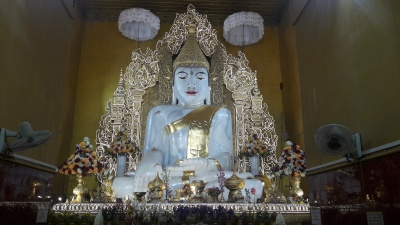 Kyauktawgyi Pagoda (the Pogada of the Great Marble Image), also built by King Mindon, stands at the foot of Mandalay Hill. Built in 1865, the Pagoda has housed large images of the Buddha sculptures from a single block of beautiful Sagyin marble. It was hauled to its position by nearly 12,000 men and took 13 days to transport the marble. The statues of 80 Arahants (the Great Disciples of the Buddha) are around the Image, 20 on each direction. Other attractions are Sandamuni Pagoda, Eindawaya Pagoda, Shwe In Bin Monastery, Mandalay Museum and Library, Zegyo Market and Silk Weaving Cottage Industry. Amarapura was an ancient capital of Myanmar Monarchy, 11 km south of Mandalay. It was a capital until 1857 when King Mindon decided to move the capital to Mandalay. Although there are little remains of the old palace area, the other attractions include, Patodawgyi Pagoda, U Bein’s Bridge and the silk weaving industry. After the fall of Bagan, Inwa was the capital of Myanmar Kingdom for 400 years from 1364 until the shift was made to Amarapura in 1841. Places of interest are Nanmyint- where 27m high masonry is, Maha Aungmye Bonzan and Bagaya Kyaung where one can witness the art and architecture of Myanmar.

Tour packages related to this destination: