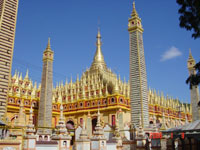 Monywa was a big village in the Bagan Period. The classical name for the Monywa is Thalawadi. The chronicles mention that Monywa was one of the places where King Alaungphayar encamped for the night on his campaign to Manipura in 1758. During the Myanmar kings’ time Monywa remained just a big village as the administrative centre for the region was at Ahlon. It was only a year after the Annexation of 1886 that Monywa became the Headquarters of the Lower Chindwin District. In the last few years with the legalizing of the border trade with India, Monywa has grown into a bustling trading centre, second only to Mandalay in the Upper Myanmar region. There are busy markets, popular restaurants, a Degree College affiliated to Mandalay University, a Technical High School, and soon there will be an Institute of Economics, the second after the one in Yangon. As the town is on the eastern bank of the Chindwin River, you can travel by boat across the river to Po Win Taung caves, with over 400, 000 ancient Buddha images and statues and murals dating from the 14th to the 16th century. Tame monkeys abound and can be feeling by visitors. Hightlights in Monywa are Thanboddhay Pagoda and Bodhi Tahtaung. Monywa can also be the base for visiting Kyaukka, a town about ten miles to the east, second only to Bagan as a center for the Myanmar lacquerware cottage industry. The Ledi Kyaung Monastery is also well worth visiting. Built by the famous Ledi Sayadaw, a renowned Pali scholar, there are now 806 stone slab inscriptions that preserve some of the Sayadaw’s writings. A few hours drive will also bring you to Twin Taung hill, an extinct volcano whose crater now forms a beautiful lake. The surrounding area has lush vegetation, and views of the area from the rim of this Crater Lake are breathtaking.

If you are traveling to Monwya by car you should stop about 20 kilometers before you reach the town to visit this most unusual Buddhist temple complex, which is part of the Mohnyin Forest Monastery retreat. It was the Brainchild of the famous Mohnyin Sayadaw whose life-like effigy can be seen nearby. Thanboddhay is the only pagoda with this unique shape in the whole country. The square temple base, which worshippers can enter is topped by receding terraces, with a myriad of small stupas surrounding the central golden cedi. Tourists can study and take photos of the twenty tagundaing, huge decorated pillars, and also big masonry fruits in the shape of bunches of bananas and coconuts, water melon, mangoes, jackfruits, papaya and so on. These fruits are also objects of veneration for the local farmers. If you can go at the beginning of the Myanmar month of Tazaungmone (usually around November), you can see the annual pagoda festival, which goes on for several days. 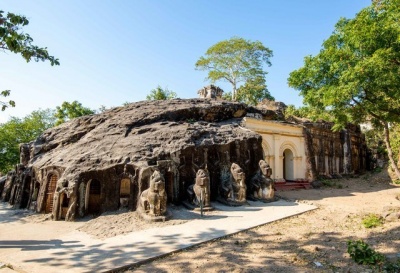 The hills have probably been occupied since the dawn of human habitation in Myanmar; to the south – west lies the Pon Daung Pon Nya mountain range, where the fossilised remains of Pontaung Mon’s may have lived 30 million years ago – were found. The caves themselves contain Buddhist statues and murals dating to the 17th and 18th centuries. Most exhibit the Inwa style, though some may date as for back as the 14th to16th centuries. A covered stairway climbs a hill to the main cave shrine, but there are dozens of large and small caves in the area filled with old Buddha images. There are over 400,000 images in these and other nearby caves. Shwe Ba Hill, just beyond Pho Win Hill, features unique pavilions cut from the surrounding sandstone and filled with plain Buddha images. 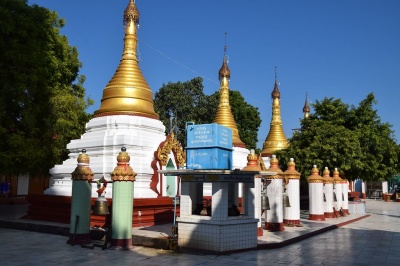 Kyaukka, is a city which produces its own distinctive kind of lacquer-ware. A few hours drive from Kyaukka will also bring you to Twintaung Hill, an extinct volcano whose crater now forms a beautiful lake. The surrounding area has lush vegetation, and views of the area from the rim of this Crater Lake are breathtaking.