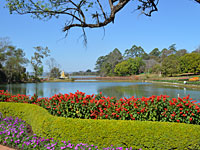 Pyin Oo Lwin formerly known as Maymyo is the flowery and gorgeous city of Myanmar. It’s sweet, pleasant and refreshing cool air attracts visitors especially for summer vacation. The city has also earned the name “Panmyodaw’ for its fragrant and pretty flowers growing all around.

Pyin Oo Lwin is situated on the Shan Plateau about 42 miles to the north-east of Mandalay. As it is over 3,000 feet above the sea level, the weather is cool the whole year round. Pyin Oo Lwin was known as Maymyo in the past. It was named after the Colonel May of the 5th Bengal Regiment, who established it as a Hill station to enable officers of the British Army based in Mandalay to go up to Maymyo on vacation. The town became famous as a hill station and summer resort in the time of British colonialism and is still so. Pyin Oo Lwin can be reached by car or train; it takes over two hours to travel by car from Mandalay. The road to Pyin Oo Lwin winds up the hills and there are many hairpin bends along the way. As one reaches the View-Point at the 21-mile which is half-way to Pyin Oo Lwin, one can have a bird’s-eye view of Mandalay in the distance below. There are many food shops at the 21-mile station and cars stop over there to change water in the radiator. Different kinds of food are available there, and a traveller can take his pick. Climbing higher from the 21-mile station you can start feeling fresh air embracing you from the hills. The climate gradually becomes colder and colder as you climb further up. The scene everywhere is green and pleasant. As you approach the Aungchantha village near the outskirts of the town, long lines of stalls selling vegetables and fruits can be seen on either side of the road. There, flowers of different kinds and colours, fresh and green vegetables and fruits can be bought to your heart’s content. Coffee, damson, strawberry, plum and pineapple are grown at orchards and plantations on commercial basis. Different kinds of flowers and many varieties of orchids grow in profusion in Pyin Oo Lwin. Once a hill station of the British Colonial government, it still has some offices, houses, bungalows, churches and recreation centres. Another interesting place to visit in Pyin Oo Lwin is the Central Market and the clock tower nearby. Another place of interest is the Botanical Gardens, which occupy a land of 432 acres with different kinds of flowers, shrubs and plants, beautiful lawns, huge trees providing shade, and different kinds of medicinal plants. You get a thrill in riding horse-drawn coaches known as “gharry while going on a sight-seeing trip in town. The Pwegauk Waterfall, known in days of old as the “Laughing Water” is about five miles north of the town. At this waterfall, water flows constantly throughout the year and there are many spots around the waterfall where people can relax in the shade of the trees and everything there is peaceful and quite. There is also the Peik Chin Hmyaung Cave some 15 miles away from the town. This natural cave has many springs and Buddha images and pilgrims visit the cave all the year round. You can also visit the Goehteik Viaduct 42 miles away from town. Photographers and video and movie producers shoot outdoor scenes in Pyin Oo Lwin because of its natural beauty spots. 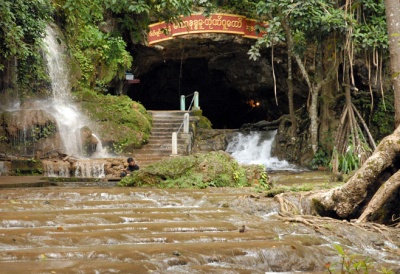 The cave is near Wetwun village 12 miles east of the town and it is three miles south of the village, easily accessible by car. The cave is at the entrance to the Peik Chin Hmyaung ravine, with many beautiful springs. When the rocks in the cave began to form, the place was under seawater. As lime piled up, the hillock took formation. Geologists estimate that it could be between 230 million and 310 million years old. The cave is called Peik Chin Hmyaung (Peik Chin Plants Ravine) as plenty of Peik Chin plants used to grow there, letting no light inside. This Great Cave of rock was formed out of a fault. As water seeped and dropped from rocks and limestone, there appeared stalactites and others in the shape of chandeliers. On entering the cave you see springs flowing from different directions. The water at some places is as deep as five feet. Water seeps from the walls of the rock; and is clean and cool. It is said that this water cures eye ailments and itching. So, pilgrims take this spring water home in bottles. The Great Cave covers an area about 48 acres. Once inside the cave, you shiver with cold what with the springs and small waterfalls. The Buddha-to-be’s life story up to His Enlightenment is featured at appropriate places. There are also Buddha images and pagodas in corners and niches. Although the Peik Chin Hmyaung Maha Nandamu Cave did exist in successive eras in the past with its rich objects of Buddhism, it remained hidden under bushes unknown to man until now. As the Cave is now electrified, pilgrims and visitors from far and near visit often. 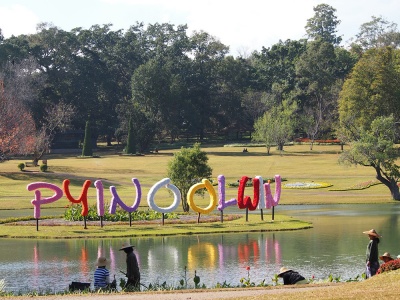 The garden features wide expanses of manicured grass, large flowerbeds, 49 acres of natural forest with walking trails, a rose garden, an orchid house, a small pagoda on an islet in a pond and several other ponds. It is very popular with picnicking families on weekends and holdings. Open-air snack shops are on a slope overlooking the parks. Colonel May used Turkish POWs to develop this 237-acre garden during World War II. It opens daily 7:00 AM to 5:30 PM. A nominal admission fee is collected.