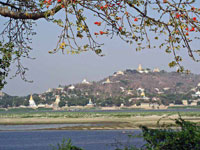 Sagaing is famous for Buddhism in Myanmar. It is the capital of Sagaing Division and has numerous meditation centres on the hill. Once an ancient capital, Sagaing lies 21 km a little south of Mandalay, beside the Ayeyarwaddy River. The Sagaing Hills are dotted with Pagodas and there are over 500 monasteries, a retreat for some 6000 monks and nuns. Monywa, Soon U Ponya Shin Pagoda, Kaung Hmudaw Pagoda and Ywahtaung Village are places worth visiting. Near Sagaing is a village named Ywahtaung which is the center of silversmith craftsmen. They are well-known for their engraving of beautiful figures and scenes and for their silversmith skills. Sagiang with its hills and pagodas is well-worth visiting to see both the beauty of nature and human religious endeavors. 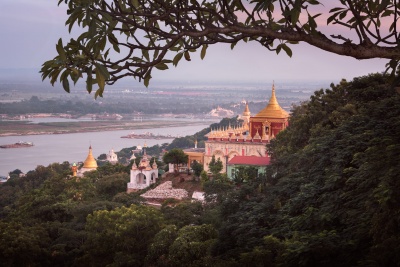 Once you cross the Inwa Bridge, you see the hilltops, each crested with a pagoda, the banners proclaiming the Buddha’s teaching, the refuge from all ills and tribulations where over 600 monasteries for monks and nuns are located for Buddhistic studies and meditation. The Padamyazedi dates from 1300 while the U min Thonze or thirty caves pagoda has many Buddha images in a crescent shaped colonnade. Mural paintings can be seen in the Tilawkaguru cave temple, which was built around 1672. At the nearby village of Ywahtaung you can see silver workers producing bowls and other silver items by traditional methods. The most impressive Soon Oo Pon Nya Shin Pagoda nearby was constructed in 1312. The view of Sagaing from Soon Oo Pon Nya Shin and its approach is marvellous. 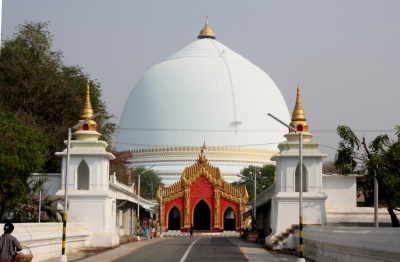 This huge pagoda is 10 km beyond the town of Sagaing. The enormous dome rises 46 m (151 feet) in the shape of a perfect hemisphere and was modelled after the Mahaceti Pagoda in Ceylon. Also known as Rajamani sula, the pagoda was built to commemorate Inwa’s establishment as the royal capital of Myanmar. Around the base of the pagoda are stone pillars, each of which is 1.5 m high. The details of the pagoda’s construction are recorded on them. 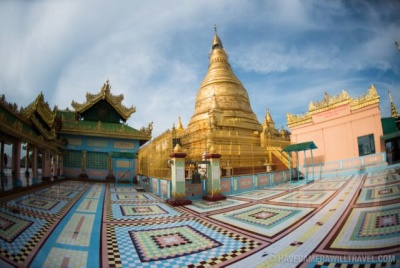 It lies atop Nga-pha Hill, one of the 37 hilltops of Sagaing Hills. The hill resembles a frog and hence Nga-Pha Hill. It was built in 674 by sage U Ponnya of Pintaya Tazeeshine Thinhathu. It enshrined Buddha relics revered by successive kings. Since its construction, it is known to have the earliest ‘soon (food offered to Lord Buddha)” offered by celestial beings before any by human beings. It is also the first pagoda offered “soon” on the full-moon day of every year of al hilltop ones. It is reputed to grant 14 wishes such as being free of killing by others, getting promotions, and having an insight into things and event. 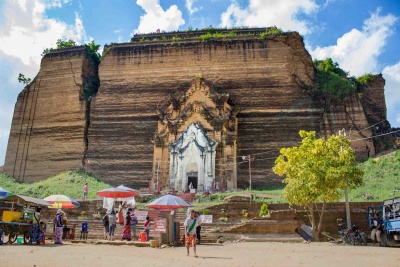 Mingun is a village on the western bank of the river Ayeyawaddy, approximately 7 miles north of Mandalay. It is reached by ferryboats across the river and takes 1 hour for up-river and 40 minutes for down-river. It is famous for many Buddhist shrines, monasteries, meditation centre and monuments of historical and cultural importance. Highlights in Mingun are Pa Hto Daw Gyi (The world’s largest unfinished pagoda), the Great Mingun Bell and Mya Thein Dan Pagoda. 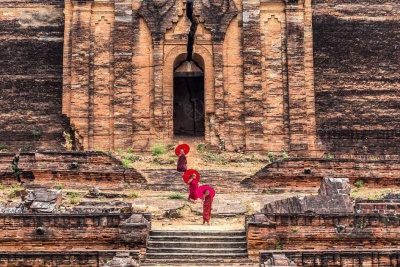 King Bodawpaya (1781-1819 A.D) had made a vow while he was in hiding at Mingun that should be ascend the throne he would implement four projects as a deed of merit that should be outstanding, viz., (1) Pagoda (2) Bell (3) Reservoir & (4) Two huge leogryphs. Over 20,000 workers toiled for twenty years on the construction of the Pa Hto Daw Gyi Pagoda, which was unfortunately abandoned due to the death of King Bodawpaya in 1819. A 15feet miniature model of the pagoda is in close proximity. Judging comparatively the work done each length measuring 230 feet of square base and completed to a height of 162 feet up to the first terrace is less than one third of the final height. Had this pagoda been completed, then it would have been the largest monument. This unfinished structure was badly damaged with cracks by the earthquake of 1838. It is a colossal mound of brickwork. A visit to this site by a ferry service launch would be the trouble. Then you will wonder and agree to believe it. 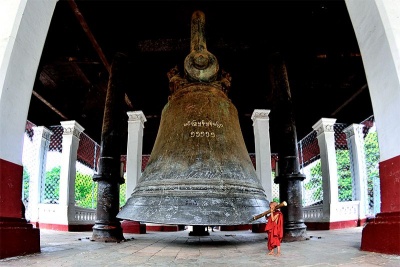 Through King Bodawpaya did not complete the pagoda project during his lifetime, yet he did complete the other three projects successfully. The Mingun Bell was east in 1790. During the smelting of the bronze, the populace was allowed t donate their contributions, who brought ornaments of silver and utensils of brass, copper, aluminum, zinc and iron metals. The bell was cast perfectly and weighs 90 tons. It is the world’s biggest ringing bell. The much heavier and larger bell at Moscow has a crack and duel in sound. This colossal, weighing bell was cast on a raised stand of sand and the mounting on large teak trunks. When it was fitted steadfast, the sand stand was washed away leaving the bell hanging on the teak trunks. Though it withstood the quake of 1838, yet a century later it dropped to the ground in the quake of 1938, where it remained till the end of World War II. The Ayeyarwady Flotilla Company lifted the bell with mechanical cranes and installed it on the existing pillars with a befitting pavillion to shelter it. One can go within the bell and stand upright. It’s worth a visit to witness the Biggest Ringing Bell in the world. 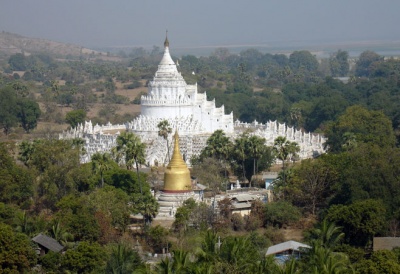 This Pagoda’s architecture does not conform to the prototype of pagodas and is in close proximity of the big bell. It is also called Hsinbyume pagoda because it was built by Bagyidaw in 1816 before he ascended the throne in commemoration of the death of his chief queen Hinbyume. It’s designer presents the Buddhist cosmology Sulamani Pagoda on the Legendary Mount Meru in Tavatimsa, the Celestial abode of the chief spirit, Indra. Seven concentric terraces represent seven mountain ranges going up to the Mount Meru. At four cardinal points are four flights of steps leading to the top stupa. The marble figures in the niches of the balustrades are the mythical monsters guarding Mount Meru.